Thoughts on the marathon.

I have been thinking a lot this week about this whole marathon thing.  I'm a slow runner, it's a fact.  I know that speed is all relative, but generally speaking, for a race of average to small size, such as the Pocatello Marathon is, I fall into the bottom third of the pack.  I would say that the "average" runner falls into the sub-four category, and ooohhhh...I am ever so close to being able to say that I run a "four - (something) - hour" marathon.  Despite the fact that I had a PR at 5:12, I was feeling pretty discouraged the couple of days following the race.  As I perused the race results, which were also published in our local newspaper, thank you so much, and I recognized several other women who are acquaintances and I saw how they fared, I felt like a snail.  Granted, all three of the women I'm thinking of ran the half marathon, not the full, but they did it a lot faster than I probably could have, and they are women of similar circumstance - mothers, similar age group, etc.

I assuaged my ego by going to a quote by Frank Shorter: "You can actually suffer a little bit more by going slowly than when you're going really fast.  A faster marathon might even be easier than a slow one, in terms of what it takes out of you mentally."  If you think about, it's probably a lot harder on the body to be on your feet, pounding the pavement, regardless of speed, for 5 hours versus 3 hours, right?  Besides physically, just think about the mental fatigue differences a slower runner experiences during the additional hour or two they're out on the road, working hard to get to the finish line.  I mean, I have to believe some people are just genetically and physiologically predisposed to be faster runners.  I spend so many flippin' hours each week during training running my butt off, though ironically my butt does not seem to be getting any smaller, and my speed has improved only minimally.
I'm also discovering that my motivation to run is largely inspired by other people.  During the last few weeks of my training I did a lot of research on runner Jeff Galloway.  I've written of him in other posts.  He has said, "The more you frame the marathon as a stressful experience, the more negative messages you'll receive.  It's just as easy to frame it as a positively challenging journey."  I like this idea and attitude so much.  I have always said that the whole purpose of training for and running a marathon is to feel good, to feel the sense of accomplishment after hard work and consistency.  If you're not having fun, even when it's painful or tiring, why do it?  There are other ways to exercise that are far less trying.  There are other ways to lose or maintain weight.  I have found that I am drawn to this unique niche by the intrigue of the unknown.  You never know how your body will react.  You never know exactly what the long run will feel like that training day, or on race day.  You never know what the weather will be like, or the landscape, or the people you'll meet.  It's all so alluring to me.
With all of these thoughts floating around in my mind, I also feel drawn to Jeff Galloway's train of thought, so I've ordered a couple of his books, which should be arriving this week.  His training method using a run/walk/run ratio for the long runs, which also, by the way, includes training runs up to and beyond the race distance, is supposed to minimize or eliminate injury and post-run recovery time.  You will be hearing more from me on his training method after I've read the books and as I start to implement his suggestions for training.
I will always strive for improvement, but I have come to terms with the idea that I may never be as fast as I'd like to be.  I will just keep on keepin' on...
Posted by Priscilla at 9:37 PM
Email ThisBlogThis!Share to TwitterShare to FacebookShare to Pinterest
Labels: exercise, first marathon, jeff galloway method, marathon training, motivational quotes, Pocatello Marathon 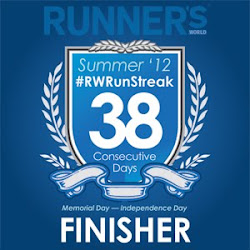